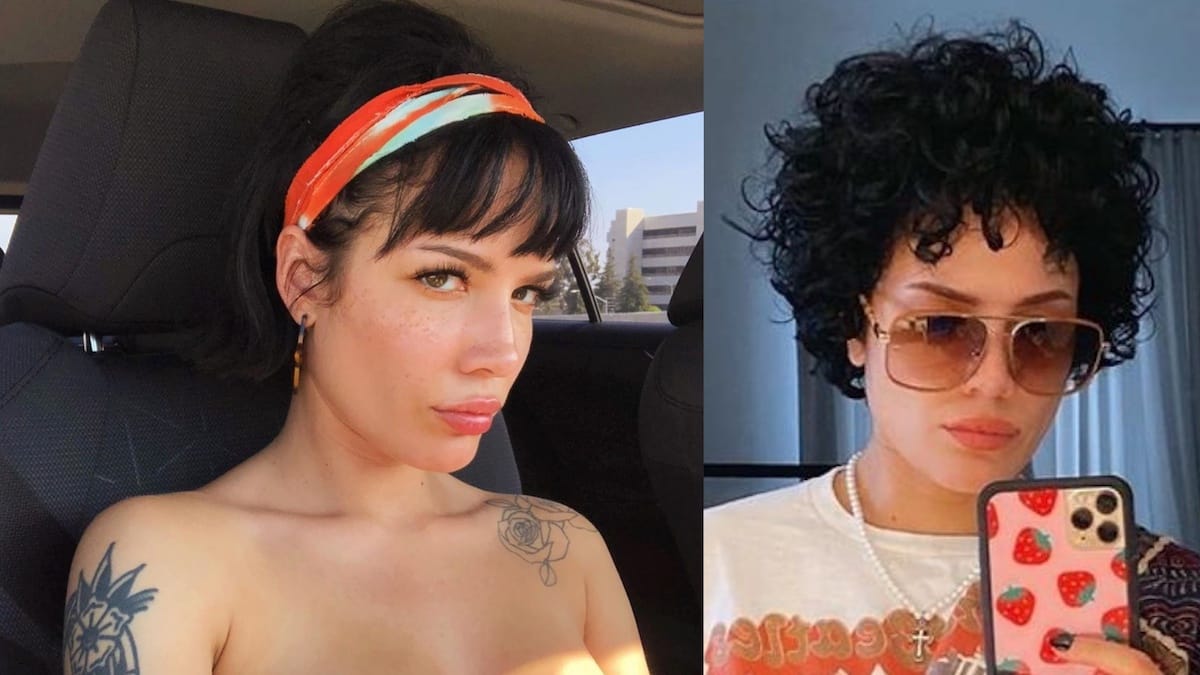 Halsey Shows Off Her Natural Curly Hair A Year After Defending Her Biracial Identity
https://hypelifemagazine.com/celebrity-photos/halsey-natural-curls-biracial-identity/

Halsey shares a photo of her natural curls a year after defending her biracial identity.

The American singer took to Instagram on Thursday (Dec. 12) to post a selfie showing off her naturally curly short black hair.

In the photo, the 25-year-old artist” can be seen wearing high-waisted jeans, a faded Beatles band tee, and a printed jacket styled casually off-the-shoulder. The “Bad At Love” singer paired the ’70s-inspired outfit with oversized sunglasses, a Western belt, a cross necklace, and her strawberry-print phone case.

Halsey Shows Off Her Natural Curly Hair A Year After Defending Her Biracial Identity
https://hypelifemagazine.com/celebrity-photos/halsey-natural-curls-biracial-identity/

Fans immediately took notice of Halsey’s head of flawless curls, taking to the comments section to praise her for her rare natural hair moment.

“natural locks !!! love them,” another commented.

“i love your natural hair ❤️ you are beautiful 🍒” a third fan added.

Halsey’s post, which has now garnered over one million likes, comes over a year after the “Without Me” singer, who is biracial, faced scrutiny over her biracial identity after she made headlines for voicing her frustrations about shampoos and conditioners that hotels typically provide on Twitter, saying that they’re not adequate for a vast number of their customers.

“I’ve been traveling for years now and it’s been so frustrating that the hotel toiletry industry entirely alienates people of color. I can’t use this perfumed watered down white people shampoo. Neither can 50% of ur customers. Annoying” she tweeted April 2018.

Her father is African American and her mother is Italian, Hungarian and Iris.

Social media users soon wondered whether Halsey was in a position to speak about the issue at all, questioning her bi-racial identity.

“You are one of the white people sweetie,” one user wrote, to which Halsey responded with a clap-back, “No. I am Not.”

After another follower asked her how shampoo can “be racist,” Halsey explained to her followers why having shampoo choices matters.

“How can u have lived ur entire life without knowing that people of color and white people require different hair care products,” she wrote.

Eminem’s Daughter Hailie Shows Off Her Legs In Blazer Jacket

Halsey acknowledged the while she has the luxury of being able to travel with her own shampoo, some people of color do not.

“The point is that mass production of those products as the standard is part of a greater problem of disenfranchisement. If white ppl can enjoy the luxury/convenience, there should be an option for everyone to. Its an “insignificant” example of a bigger problem. That’s all!” she added.

When some people tried to make the tired argument that hotel shampoo wasn’t good for anyone’s hair, regardless of race, she again laid out her stance.

“I’ve been to hotels with fucking Hermès toiletries. The point is, people think “oh they just use normal cheap shampoo” but that’s because u associate “normal” with “white.” That’s not everyone’s standard. End of story. I’m good on the shampoo debate now lol,” she elaborated.

Last year August, the singer had a natural hair when she shared a mirror selfie showing off her naturally curly locks.

“new growth, new growth; all these fades I outgrew,” she captioned the photo.

“I can’t believe I spent a whole damn year growing out my curls under those wigs for y’all to say my natural hair looks like a wig… some f—d up shit lmao,” Hasley responded to the critics who accused of wearing a wig and cultural appropriation.